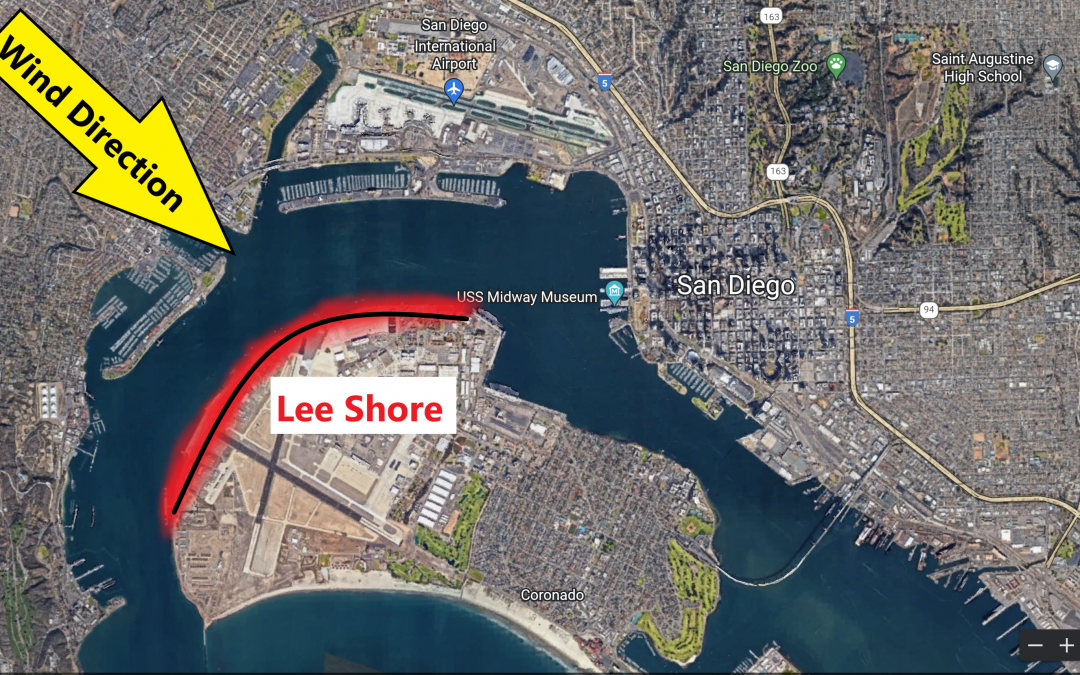 A lee shore is a one of the everyday dangers of a sailor and skippers should always be aware of the presence of a lee shore. A lee shore is exactly as it sounds; a shore (object, obstructions, etc.) to leeward of a boat. Lee shores are dangerous because if a boat were to lose its maneuverability, they would eventually drift towards the lee shore likely resulting in a grounding or collision with the shore or object.

Recognizing a lee shore and taking early action to avoid it is a skill every sailor should possess. In addition, avoiding contact with a lee shore is almost always avoidable…. that is, until its not.

A great example of a lee shore are the docks to leeward as you sail out of Harbor Sailboats. We sometimes witness a Capri 22 leave the face-dock under sail and a few minutes later they find themselves struggling to stay away off the docks while on starboard tack sailing out of the marina.

Why do sailboats lose maneuverability or struggle to stay off the dock in the example above? Often, its because the boat is “stalled” as the skipper is trying to point higher into the wind in an attempt to stay off the lee shore but instead the boat has entered the “no-sail-zone” and is sliding sideways and ends up drifting into the lee shore. (the wind is pushing you to leeward)

Lee shores should be recognized early so that a skipper can take appropriate action like tacking to get to “safe water”. That said, you may find yourselves approaching a lee shore and recognize that the boat does not have the forward momentum to tack out of the danger. In this case (assuming you have sea room) you need to get the boat moving again by falling off to gain speed and then complete your tack to safe water. We mentioned earlier that all lee shores are avoidable but if you do not recognize your situation early, you may not have the room needed to fall off to gain speed and tack. Thus, it’s extremely important to recognize the presence of a lee shore and if you’re in danger of interacting with it.

Relative to Harbor Sailboats and the Capri 22’s, it’s always best to sail yourself out of a situation like this rather than going for the outboard. When the skipper reaches for the outboard they let go of the helm, take their eyes off the surroundings, and spend valuable time trying to start the engine and usually end up worse than they were 30 seconds before that. If you have the sea room, fall off to gain speed and then tack!

Recognizing and avoiding lee shores and lee objects is also important when anchoring, avoiding channel markers, bridge pilings, passing other boats, etc. A good skipper always knows where “safe water” is and how to get there.