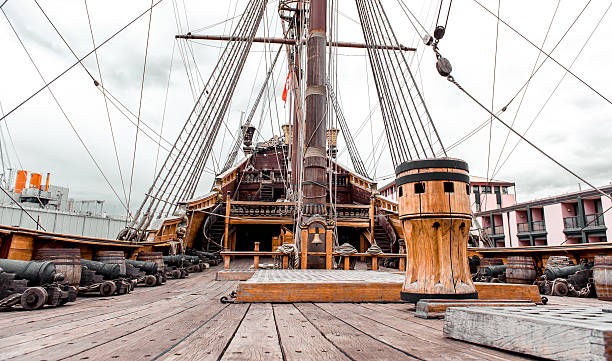 One of the most challenging aspects of sailing is learning the language of sailing. Terms like starboard, helm, halyard, sheet have very little use in the English language yet they are extremely important while onboard a sailboat.
Here is a little history lessons with some of the terms you have come to learn while sailing.
Starboard- A ship’s “steering board” (rudder) was traditionally located on the right side of the vessel and resembled more of a paddle than today’s transom hung rudders. Today, the right side of the vessel is know as the starboard side as a reference to old steering boards.
Port- With the steering board located on the right side of the ship, a vessel needed to be tied up on the left side to load cargo as not to damage the steering board that extruded from starboard. While making port (tied to the dock) the left side of the ship became known as the port side.
Halyard- A halyard is the line that raises and lowers the sails. In the olden days, a mast was know as the “yard” and pulling the sails up was hauling them up the yard.
Tack of the Sail- The tack of the sail is the forward and lower corner of a sail. With wooden mast (or yards) the sail was literally tacked into the mast with a spike and became known as the tack.
Fathom- A fathom is a unit of measurement commonly used to describe the water depth. 1 fathom equals roughly 6 feet. When one stretches their arms out to give a hug that distance was know to be about 6 feet and the Old English word “faethm” means to embrace.
Head- The ships bathroom is refereed to as the head but in the early days the forward part of the ship was also know as the head. The toilet was typically placed in this section were crashing waves would help in the cleaning of the facilities. Today the heads location and cleaning practices have changed but the name remains.
Boom- That is the noise the boom makes when a crew member is standing in the wrong place. We made that one up but it’s a good reminder to keep everyone safe!