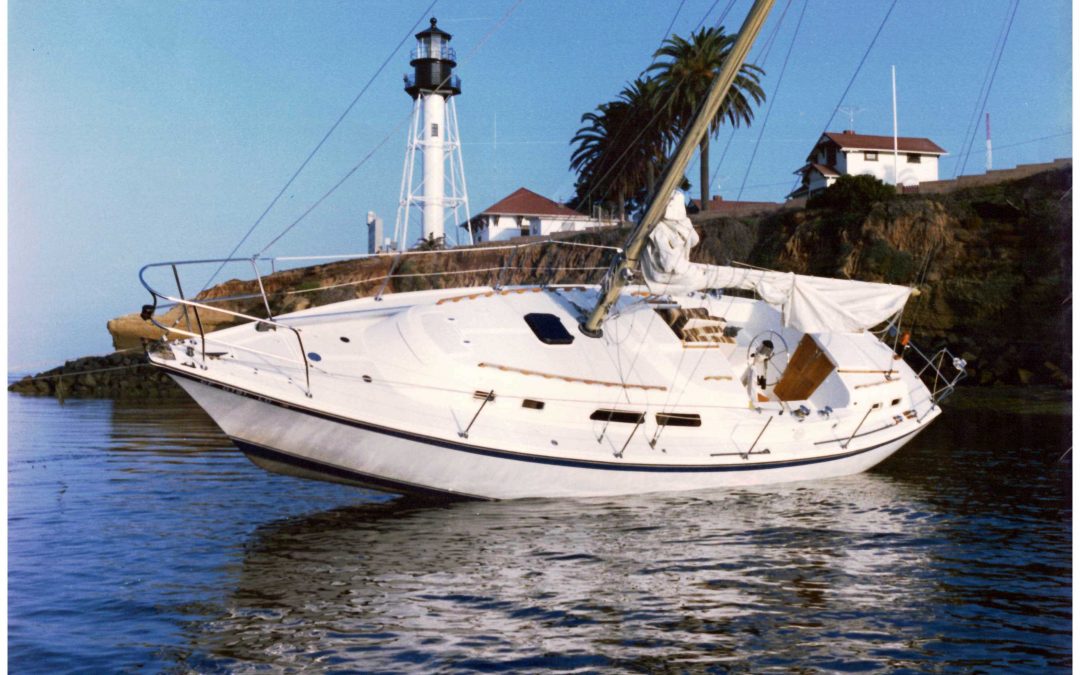 The boat in the picture that’s grounded off Point Loma is the O’Day 37, “Sandpiper”. A nice boat with a center cockpit design and for its day, a large aft cabin.  Harbor Sailboats had three of them in the fleet at the time.

I think the year was 1983 when the club member chartered the boat and spent the weekend at San Clemente Island. In those days there was less Navy security restrictions and a decent anchorage in Pyramid Cove on the southern tip of the island. San Clemente has plenty of good fishing spots and I’m told the abalone were abundant. The distance to the Cove from San Diego is approximately 60nm and in prevailing winds the comfortable and fast point of sail was would be a tight reach on starboard tack. In the summer, the passage could be made in daylight hours making it a great weekend cruise. The crew aboard “Sandpiper” were three adult men and the teenage son of the skipper.

After a non-eventful stay, the trip home started late causing them to reach San Diego after the sun had set. I became aware of the grounding after receiving a call from the coast guard shortly after midnight. I was still a bit groggy when the voice on the other end of the phone said, “Is this the charter company”? My mind’s eye knew that at this time of day this was not going to be a pleasant conversation. The coast guard sailor said, “Good Morning sir, this is so and so from the United States Coast Guard Point Loma and I think we have one of your boats here”. I clearly remember responding and hoping this was all a bad dream, “I don’t recall there being a marina at the point”. He chuckled and gave me directions to the lighthouse. Five minutes later I was on my way not knowing what I would find.

Upon arrival to the lighthouse compound I was relieved to see all four crewmembers safe ashore wrapped in Coast Guard supplied wool blankets. There were divers in the water that had assisted the crew by swimming the anchor out to sea in order to keep the boat from drifting any closer to the beach but it was obvious the boat was bouncing on the bottom with every swell that passed under her. When her keel came down hard on the clay bottom the boat would shudder and you could see the rig pumping in a nauseating fashion.

When it was obvious there was nothing I could do at that time to mitigate any further damage to the boat, I turned my attention to the skipper of the vessel to understand how he could have got himself into such a predicament. His explanation stays with me like it was yesterday. He recounted how they had started back towards San Diego later than planned but the weather was clear and calm. He had previous experience entering the harbor at night, so he was not overly concerned. The crew prepared dinner underway enjoying some pasta, salad, and red wine. Possibly a little too much red wine. The boat was underpower making way at 6-7 knots. After the carbo-load and chianti, the adults got a little sleepy and they fell into a watch rotation of 1 up with 3 down below sleeping. It’s important to remember this was before GPS and although the vessel was equipped with Loran C and RDF (radio direction finder), neither were utilized while navigating that day. Instead, they relied solely on steering a compass course. The evening was clear and they anticipated seeing the Point Loma light well offshore given that it has a rated 22 nm range of visibility.

As the crew rotated up and down, the retiring watch would relay the proper course and the new watch would confirm the same. Somewhere that night the system broke down and instead of the compass course the final watch was told to “head for the light”.  The same light that they all had stared at for the past 3 hours. Well, you know the rest of this chapter. Like a moth to flame they headed for the light until they ran out of water.

The captain and crew had arranged for their own ride back to the marina. For this I was thankful because I didn’t I think could hold my tongue any longer. Upon leaving he pointed to the boat with pride and boasted, “You should be proud us; we got the boat anchored, pinned the bin boards in and lit the anchor light just like we were taught”.