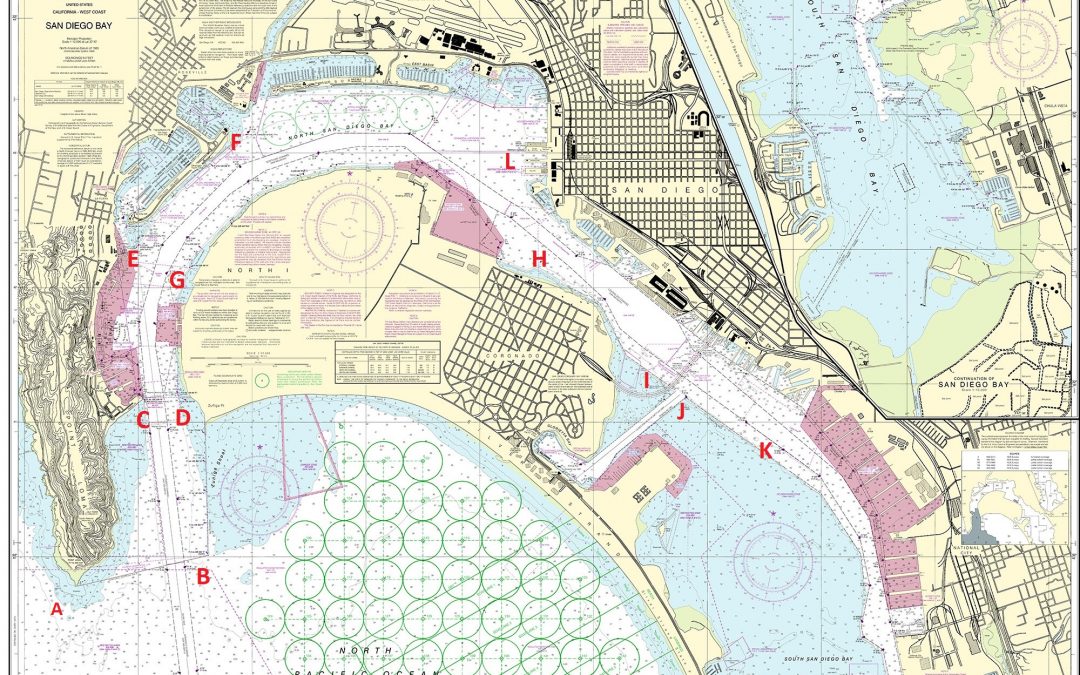 The season is here with warmer weather and the bay is full of boats! Last weekend, we took a little time to enjoy the start of the season ourselves and noticed some rusty skippers and witnessed four boats aground (none of them from HS thankfully). So, let us review some of the navigation hazards of the bay to make sure you do not end up high and dry like these skippers did.

A– Kelp Beds- Just outside of Point Loma and running along the coastline to Mission Bay is a growing kelp bed. Sailors must stay clear, or they will foul props and rudders in this very thick kelp bed. San Diego buoy 1 is a clear waypoint when entering or leaving the channel entrance.

B-Zuniga Jetty- A man made rock jetty protecting Coronado Island that is no longer maintained and can be submerged during high tide. Skippers entering the bay, or exiting, must make sure they have cleared the tip of the jetty before entering or leaving the channel.

C-Ballast Point- Extending from the Coast Guard station on the western side of the channel, the Ballast Point shoal extends from the small beach next to the submarine dry dock. Skippers should stay in the channel, and well away from the beach in this area.

D-Rock Pile Adjacent to Ballast Point- Directly east from Ballast is a well-marked pile of rocks just outside the channel. This rock pile is just south of the Navy loading dock and extends abouts 300 yards from North to South.

E-Shelter Island Shoal- The Shelter Island entrance has a dedicated channel to keep boaters away from a shoal that is just off the entrance. Skippers must pick up the first channel marker and never cut the corner when coming in or out of Shelter Island.

F-Shelter Island East- At the opposite end of Shelter Island, just off the Bali Hai restaurant, exists another shoal. This is clearly marked by shoal makers as well as a green buoy, boats cannot cut the corner into Americas Cup Harbor.

G-North Island- Besides the obvious shallow water along the shoreline, North Island has an area of rocks at the North West section that is marked by 4 pilings (A-D). This is just South East of the loading dock and appears to be deep water but in fact is not.

H-22A- Just South East of the aircraft carriers lies buoy 22A, just outside of the channel and buoy 22. 22A is marking a long shoal off the homes and beach of Coronado near the ferry landing. Again, inviting water that turns out to be very shallow.

I-Coronado Bridge Mooring Field- Likely the most unknow danger of the bay is the shoal just off pillar 14 of the bridge and next to the mooring field. The water here goes from 40’ to 5’ is just a couple boat lengths. Skippers sailing under the bridge should keep to the middle of the channel and cross the bridge at the widest part.

J-Gloriette Bay/Navy Seal Base- After passing the bride you may turn right into Gloriette Bay but must pick up the channel entrance and stay in the channel until you have reached the anchorage. Additionally, a large shoal is present at the south end of the Gloriette bay entrance and can be recognized by the Navy SEAL base and buoy 26.

K-South Bay- South San Diego Bay is very shallow in general and sailors must always stay in the channel to avoid groundings.

L-Midway Aircraft Carrier- It should go without saying but stay at least 1,000 feet away from the Midway aircraft carrier. If you sail under the ship, your boat will be coming back without a mast! 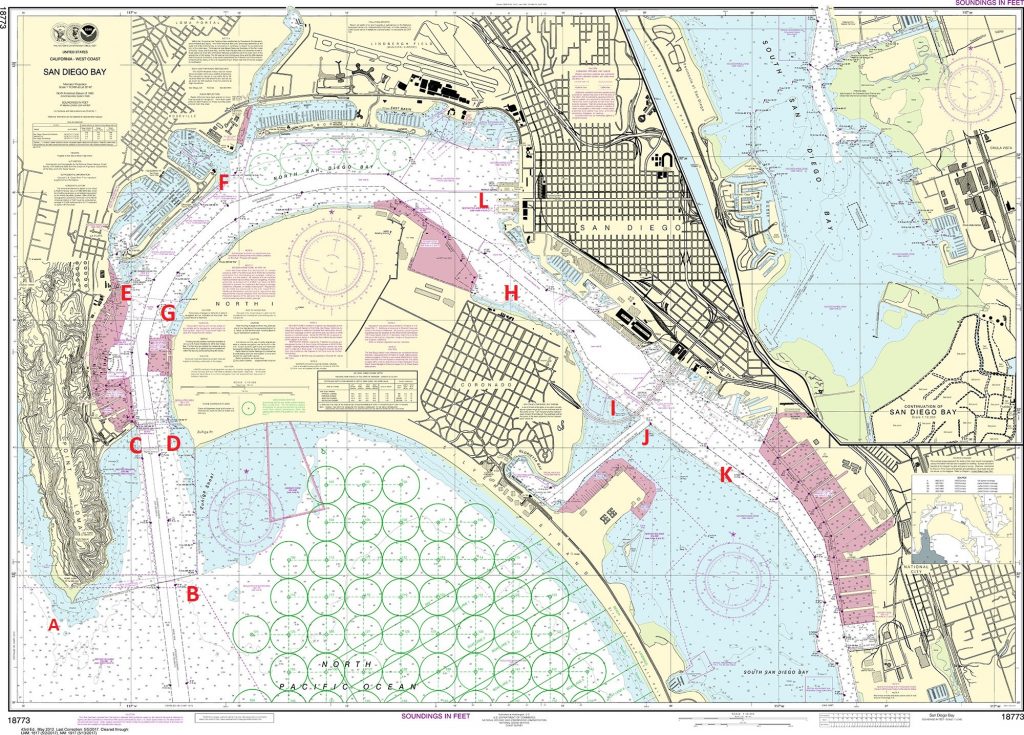